Google Marketing Live kicked off last week and did not disappoint. Often referred to as the “Super Bowl for Google Ads,” the two-day event gave Google a platform to share new product rollouts, improved features, and much, much more.

More than 5,000 marketing professionals attended Google Marketing Live in San Francisco. (Sadly, this one was stuck in his Rochester, NY office watching the livestream. Fingers crossed for next year…)

Anyway, let’s get to the recap!

Ever heard of the toothbrush test? Google’s cofounder Larry Page created this test originally as an acquisition strategy. Believe it or not, Google has done fairly well with acquisitions over the years, so they implemented it across the board within the company. The test asks: “is this something I will use once or twice a day, and will it make my life better?”

Any time Google rolls out a new product or feature, it must pass the toothbrush test. As you’ll see, Google Marketing Live rolled out new products and features that certainly do that.

The Google Discover feed has a reach of more than 800 million users around the globe. Add that with the millions of people who use YouTube and Gmail daily and what do you get? More places for Google to serve ads.

Discovery Ads allow advertisers to upload ad creative, including images, headlines, and description text. Through machine learning, Google will serve the most relevant ad depending on the user and their platform. Look for these ads to roll out later in 2019. 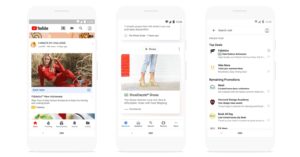 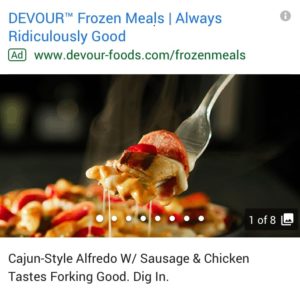 Like other industries, marketing and advertising has a copy-cat nature. As a result, Google is rolling out Gallery Ads. These “swipeable” ads will sit atop mobile SERPs and allow advertisers to showcase four to eight images with headlines, description text, calls-to-action, and more. Gallery Ads will also be available later this year.

Google possesses artificial intelligence, algorithms, and product-level knowledge that the average marketer does not. As a result, Google for some reason thinks it’s smarter than us! And quite frankly, I’m going to trust them on that one…

Smart Bidding will serve your most relevant ad when Google believes a conversion is likely. Nothing new to see here. However, it is rolling out some new features within Smart Bidding that marketers and advertisers have seemingly been asking about for years.

Maximizing conversions is the most popular bidding strategy because we need to show ROI. Until now, though, Google did not allow you to focus on which conversions to optimize.

This is a fairly simple change: Google will be combining custom affinity audiences with custom intent audiences. Google believes this will create a more seamless way to reach your target audience easier.

Google understands the rise of Amazon and how popular that shopping platform has become. That’s why the company is making it easier than ever to purchase products, compare prices, and research features throughout the Google Shopping experience. Buyers now will have three methods of purchasing: the vendor’s website, in-store, and directly through Google – which comes with a Google guarantee. Look for these shopping enhancements later this year across Google, Google Assistant, Search, Images, and YouTube.

We’ve all heard clients say it:

In the past, the Average Position metric in Google has been somewhat misleading. Google itself admitted that the feature should have been labeled “Average Auction Position.” For example, an ad could receive the number one average position for a certain search term, but it may not show until the bottom of page 1 or at the top of page 2 in the SERPs. In reality, an ad is much better off being in the third position on the top of page 1.

Remember, the metric is an average (it even says so in the name). That means an ad could receive the top position 10 times, the fourth position twice, and the fifth position seven times. Although the ad never appeared in the third position, its average would fall somewhere in that range.

Google is rolling out four new position metrics for advertisers to bid on and understand easier. They are:

Average position will be eliminated in September. 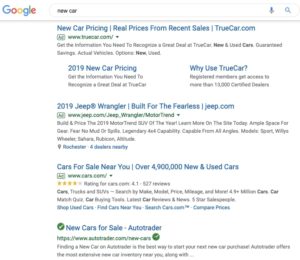 These ads represent “Absolute Top Impressions” because they appear at the absolute top of the page. 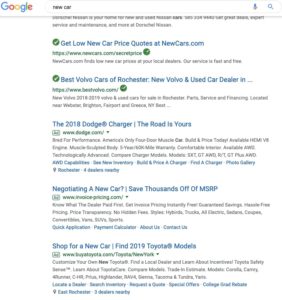 These ads represent “Top Impression” ads. The 2018 Dodge Charger ad technically is in Position 1, but all of the ads appear below the organic results.

Google has reinvented the way we should use the Planner – and not just for keyword research. Advertisers will be able to use Planner as a sandbox of sorts, perfect for testing bidding strategies, optimization tactics, and forecasting future campaigns. You can choose which metric you want to maximize (conversions, clicks, views, etc.) and see how certain bids would likely result.

Remember, these are just Google’s “best bets” and cannot be held accountable. Unfortunately, the company hasn’t quite figured out the ability to tell the future. However, the new Planner will definitely be useful for ideas and gives us a well-guided plan in just minutes. Feel free to share these projections with your clients when they want to start a new campaign.

If you’ve read this far, thank you. Now you get to endure some of my personal thoughts on the 2019 Google Marketing Live event. Over the years, I’ve “joined” this event put on by Google. I’ve worked directly with Google experts being a part of different Google Partner agencies. The overarching theme – whether it was watching the livestreams or talking with our account rep – was to spend more money.

“Your budget is too low.”

Good luck telling your boss or clients they need to spend more (believe me, I’ve tried….). This year’s Google Marketing Live, however, presented a breath of fresh air. Many of the topics and segments focused on being more efficient with the time and budget you have available.

With machine learning, Smart Bidding, and other automated campaign optimizations, Google is making it easier than ever for any business to advertise across its platforms. My question: is Google making it too easy?

Hear me out. I’ve grinded through hundreds, if not thousands, of campaigns over the years. I have learned the ins and outs of Google Ads and Google Analytics. I’ve found certain strategies work and others don’t. Now, and definitely moving forward, pretty much anyone will be able to see results advertising on Google.

Remember, Google is a business. That’s why their go-to answer and request was to always spend more money. They’re essentially doing that, just in a different way. Rather than drawing more money from their current customers, Google is exploring an untapped audience that had previously avoided Google’s services because they didn’t have the time, skills, or budget. Google has changed its product to meet those needs, while still serving its current clientele. It’s like they actually know what they’re doing…

JAY Advertising is proud to be a Certified Google Parter.

Next Post (n) A Creative Progression In Audio Paradise